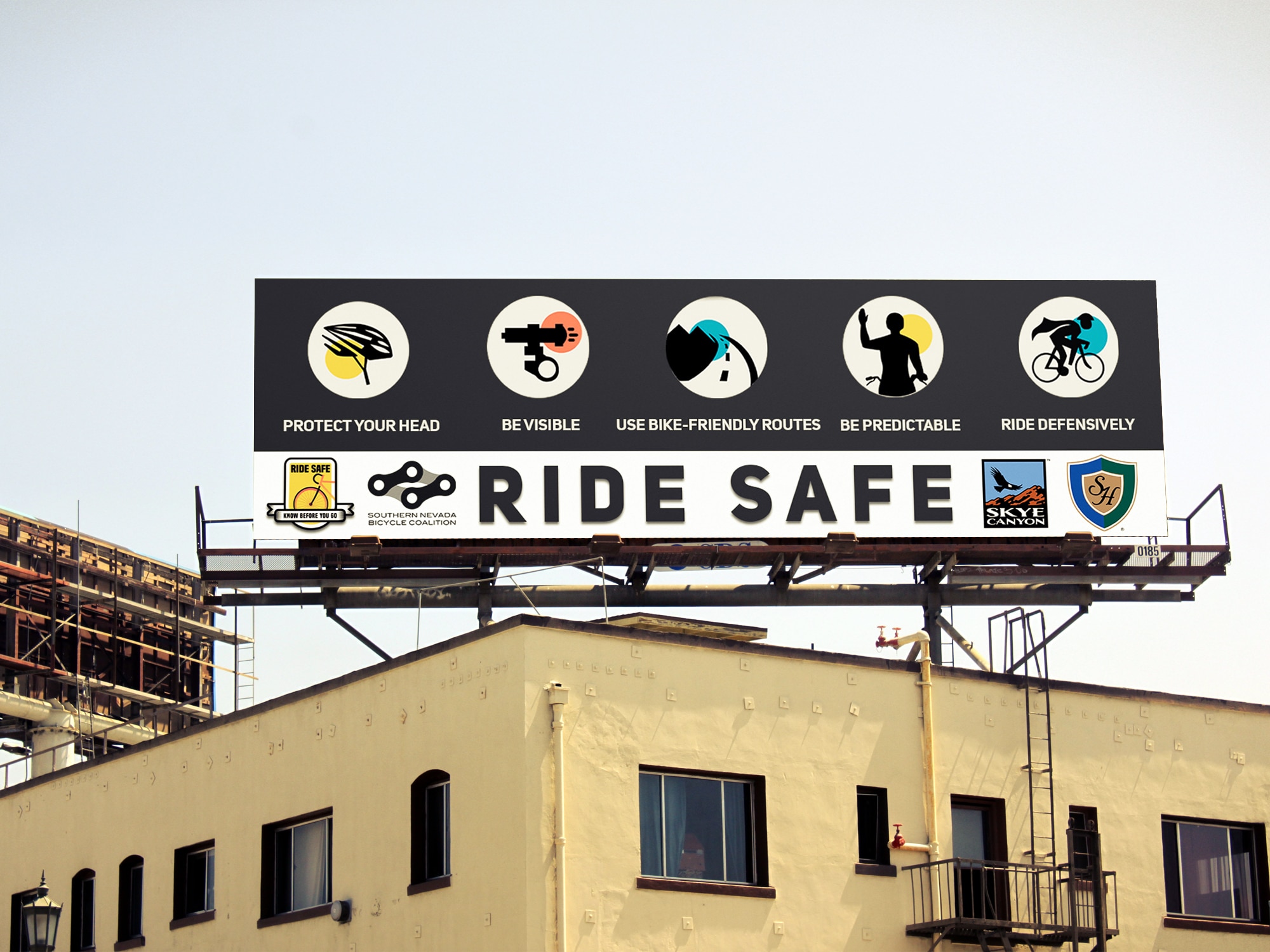 Ride Safe: Know Before You Go

“Ride Safe: Know Before You Go,” is an education program targeting new and existing cyclists. The second component of a three-part safety campaign rolling out in 2022, Ride Safe identifies five critical points of cyclist safety: Protect Your Head, Be Visible, Pick Bike-Friendly Routes, Be Predictable, and Ride Defensively.

In partnership with Skye Canyon and Southern Highlands, starting Monday, May 16, 2022, Ride Safe billboards will appear along major streets and highways around the valley.

During 2020, Southern Nevada’s cycling population grew exponentially. Nationally, bicycle sales were up 65 percent during 2020, with e-bike sales increasing 145 percent.[1] The number of registered bikes on the Bike Index increased by 241,330 in 2020. In Las Vegas, retailers like Jared Fisher, CEO of Las Vegas Cyclery, report having sold up to one year’s worth of inventory in three months during 2020.

According to the Outdoor Industry Association’s 2020 Participation Report, 2020 marked the most significant uptick in outdoor participation in history, and cycling was the third most popular activity, behind walking and running. It’s projected that 65 percent of new cyclists will stick with their newfound passion after restrictions lift. In another study recently released by Get Outdoors Nevada and Nevada Outdoor Business Coalition, cycling was identified as one of the more highly engaged daily activities, positively impacting residents’ quality of life.

“While having the infrastructure in place is important, such as bike lanes and trails, advocacy and education is equally important to the safety of our cycling community,” said David Swallow, RTC deputy chief executive officer. “We are proud to support Ride Safe’s mission to raise awareness as more of our residents and visitors are choosing biking as a mode of transportation.”

To cultivate more unity among the valley’s growing cycling population, Saturday, May 7, RTC, SNVBC, and Las Vegas Cyclery host Ride Safe Bike Safety and Maintenance Event. The event is free and open to all cyclists. It includes a discussion on Bike Safety and learning how to protect your head, be visible, ride defensively, and much more! More information is available here.

A cyclist is only fully protected if their helmet fits properly.

Cyclists must take measures to be sure drivers can see them.

In addition to the four points above, cyclists should: